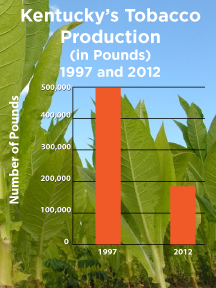 Agriculture in Kentucky is undergoing a period of transformation, one marked by changing markets, new products, shifting consumer demand, and technological developments. Tobacco played the major role in Kentucky agriculture for decades. Over the years, this has changed dramatically. The chart below shows the sharp decrease in tobacco production from 1997 to 2012. The 497,856,262 pounds of tobacco produced in 1997 was done on 46,850 farms. Just 15 years later in 2012, the number of pounds decreased by 63% to 183,904,938 pounds; the number of tobacco-producing farms decreased by 90% to 4,537 (United States Department of Agriculture (USDA), National Agricultural Statistics Service. 2012 Census of Agriculture. Kentucky. May 2014).

Despite this dramatic shift from 1997 to 2012, the Commonwealth’s agriculture sector is adapting and succeeding, as evidenced by a 60% increase in market value of agricultural products sold during the same period to over $5 billion (USDA, National Agricultural Statistics Service. 2012 Census of Agriculture. Kentucky. May 2014). This is largely due to diversification efforts. Examples of these recent efforts include the following: